Requiem: El Paso and Beyond

A provocative and somber tribute to those who lost their lives and were injured in the mass shooting in El Paso.

On Saturday morning, August 3, 2019, a twenty-one-year-old self-declared white supremacist from Allen, Texas, targeted "Mexicans" in a hate crime and shot and killed twenty-three people at the Cielo Vista Walmart in El Paso. Among the dead were fourteen Americans, eight Mexicans from nearby Ciudad Juarez, and one German. Another twenty-six were injured. It was the seventh-deadliest mass shooting in the United States since 1949 and the deadliest attack on Hispanic and Latina/o Americans in U.S. history.

This work is meant to honor the memory of the twenty-three souls who lost their lives and to be mindful of the twenty-six others who were injured in El Paso. It also honors and reminds us of the countless others who have suffered—and continue to suffer—from gun violence.

Requiem: El Paso and Beyond is a collaboration of photographer John Willis, poet Robin Behn, and composer Matan Rubinstein.

The 21-minute film Requiems: El Paso and Beyond contains photographs, one fading into the next, of the spontaneous flower memorials that were placed at the site in the days after the mass shooting. Intertwined with the photographs is text with movement of its own that addresses that tragic day and gun violence in America. These dynamic images are set in a musical soundscape that references requiems and dirges from many musical traditions. The film is available to be shown at film festivals, museums, readings, and the like.

Requiem for the Innocent: El Paso and Beyond was published by GFT Books in 2020. The fine art book juxtaposes prints of the flower memorials with text on facing pages. It also contains a link to the music.

The signed, limited edition portfolio Requiem for the Innocent: El Paso and Beyond, a large handmade box containing seven large prints interleaved with seven pages of text on vellum, is held by Yale University Library, Boston Public Library, University of El Paso Special Collections, and more. It is available from the artists. 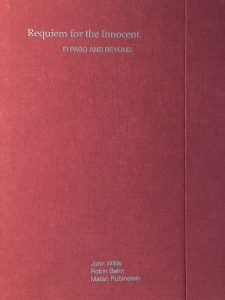 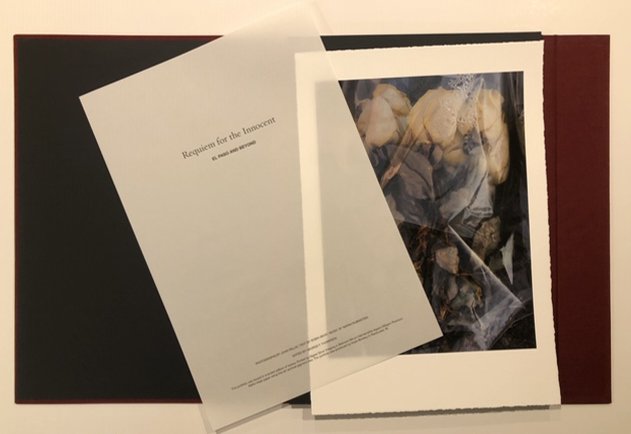 The fine art exhibition Requiem for the Innocent: El Paso and Beyond has been featured at Gallery Kayafas in Boston where 23 large photographic prints, to memorialize the 23 dead, were hung horizontally with a mini-speaker (a total of 22 mini-speakers) hung in between the prints. The soundscape was designed so that, upon approaching each mini-speaker, its particular segment of music would come to the fore with the other music mixing in the background. On a separate wall, a Power Point of the dynamic text was projected.